The Next Generation of Animated Documentaries Thrives in Viborg

The Next Generation of Animated Documentaries Thrives in Viborg

The Changing Role of Animation in Documentary Film

101 years ago, Winsor McCay (b. 1866) animated the sinking of the Lusitania, and changed everything. People realized that, rather than simply being an amusement, animation could illustrate stories and concepts that could not be filmed practically. Animation became crucial for demonstrating scientific concepts, historical re-enactments, and to provide visual accompaniment to the “talking heads” in documentary films. Animation took on an important role in non-fiction films, allowing directors to use creative visuals to augment and illustrate their stories.

Notable examples of this powerful use of animation within documentary include Chris Landreth’s (b. 1961) Ryan (2004) and Paul Fierlinger’s (b. 1936) animated autobiography Drawn from Memory (1995), in which animation enhances, informs, and provides a visual commentary on the narration. For decades, animation largely served documentary films as illustrations do in a book; beautiful and necessary, but secondary to the story.

However, the use of animation in non-fiction film has sometimes shifted and redefined genres. Norman McLaren’s (b. 1914) groundbreaking Neighbours (1952) won an Academy Award for Best Documentary (Short Subject). The Academy later regarded categorizing this film as a “documentary” as an error1, and yet the fact that it was both nominated for, and won, in that category, shows the power of animated storytelling outside of the constraints of fiction.

While many purists believe that a documentary film has a responsibility to tell the truth and remain rooted in pure fact, a new generation of filmmakers are making films that challenge those very notions of truth and objectivity. The early 2000s brought us award-winning animated features like Persepolis (2007) and Waltz with Bashir (2008), which advanced the arts of both documentary filmmaking and animation at the same time, creating narratives that explore the line between fact and fiction. Filmmakers embraced the subjectivity of memory and ideas about representation, telling stories that aim for truths beyond facts.

This freedom to merge tools and techniques, and explore the world of creative potential within non-fiction stories has opened the door to a whole new style of film and visual storytelling. Filmmaker and instructor at The Animation Workshop / VIA University College, Uri Kranot (b. 1975) says: “We have seen the documentary genre’s borders expand with animation, contributing new visual tools of expression with the endless storytelling possibilities the medium has to offer.

“Looking at what has been done and what is currently being made within this field, it seems hard to define what makes a film an animated doc. Some use real soundtrack, some involve real footage imagery, and some fabricate every aspect of the production. The one element that connects them all is the ‘seed of truth’ – the feeling that something within the story is real. Manipulated – yes, of course, but telling a story that deals with reality to some extent.”

For filmmakers Michelle (b. 1977) and Uri Kranot, the journey has been a personal one. Driven by a passion to make films with powerful political messages, such as the multi-award-winning Hollow Land (2013), they worked without regard to classification or genre. However, when their work started being referred to as ‘animated documentaries’, they embraced the label, and used it as they collaborated and mentored other animators.

“In my work with students at The Animation Workshop, developing their bachelor films, I’ve noticed that whenever a student comes with an idea that is connected to a real event that happened to him or her, these ideas turn out to become the films that stand out,” says Uri Kranot. “Working from personal and real life experiences brings a heightened credibility and identification that is so hard to otherwise achieve in animation.” The pair set out to help filmmakers realize and share these experiences, building community along the way.

In 2012, Michelle and Uri, together with The Animation Workshop (TAW), started the groundbreaking ANIDOX:LAB professional training program in Viborg. ANIDOX is a natural fit for TAW, which has been educating and supporting animated filmmakers for decades, working toward the highest standards in creative and artistic achievement, while also building industry partnerships and helping to develop the economic future of the animated arts.

ANIDOX:LAB cultivates and develops ground-breaking projects, at the boundaries between animation and documentary filmmaking. The ANIDOX decision to populate lab projects equally between animation directors and documentary filmmakers was a crucial one. Documentaries are usually defined in the edit, when a filmmaker gathers all their footage and assets and assembles the story from the material they have. Documentary filmmakers often allow the story to emerge naturally as they go, and make crucial decisions in post production. Animation directors, on the other hand, begin making their films with a lengthy pre-production process, and the film doesn’t emerge as they go: it’s planned precisely from the very beginning.

Allowing these two kinds of filmmakers to learn and work together is a transformative experience that facilitates a common vocabulary and shared context between these two very different filmmaking approaches. Bridging a gap in knowledge and expertise, ANIDOX is led by practicing professionals in the field and has created a strong peer-to-peer learning network. TAW has been proud to continually expand the lab program, adding facilities, financing, and distribution possibilities for animated documentary projects.

In 2014, TAW financed and created the ANIDOX:Residency program, expanding on the capacity of ANIDOX:LAB’s classes and workshops, using TAW facilities and workstations, to host intensive production and provide financial support for selected films. The ANIDOX:Residency program has helped produce at least one high quality animated short film every year since, and the TAW network assures their visibility and distribution, in partnerships with the Danish Film Institute, the Swedish Film institute, CPH:DOX, Boost Hgb, Nordisk Panorama, Documentary Campus and Viborg Animation Festival.

The spectacular success of ANIDOX, and the power of telling stories that emerge from real life, has been instrumental in advancing the art of animated documentaries in Europe. According to Klara Grunning (b. 1971), film commissioner for documentary features, shorts and digital storytelling at the Swedish Film Institute: “[ANIDOX] is to my knowledge the most successful, creative and important initiative of its kind, inspiring new types of storytelling, technique/new technology, collaboration and artistic expression – to develop, explore and strengthen the marriage of animation and documentary filmmaking.”

These successes, and the increasing visibility of animated documentaries as a whole, has led to the flourishing of ANIDOX programs and initiatives at TAW that embrace new artists, new technologies, and new audiences, while remaining true to the core mission of the project. “All our ANIDOX activities are linked,” says Michelle Kranot. “From the youth and education initiatives to the professional training and production support, ensuring that whatever direction we take, our network benefits, our audiences benefit, and our outreach is meaningful.”

Some of the current ANIDOX programs and initiatives include:

The ANIDOX Youth Program uses animated documentaries to empower young artists to tell their stories. Working with educators, community centers, and groups of marginalized youth, ANIDOX:Youth focuses on integrating young people and children in professional productions, as well as giving them tools to create their own films and stories. Youth programs not only empower young people to share their stories, but it also helps to train and foster a new generation of filmmakers to create their own legacy.

As we continue to explore and push the boundaries of visual storytelling, it is natural that the art form take advantage of new technologies and resources. Animated documentaries are moving into VR, with stunning results. The Kranot’s animated VR installation Nothing Happens (2017) has been showcased around the world, and won awards in Australia, Canada, and the UK. Exciting new ANIDOX VR projects are pushing the boundaries of interactive storytelling and exploring ever-newer technologies.

As more and more people are drawn to this unique art form, with the possibilities of merging fiction and truth and exploring new ways to represent reality, the ANIDOX team are more and more in demand for exhibitions, lectures, and masterclasses. These masterclasses, presentations, and workshops are being offered at film and animation festivals throughout Europe, and have appeared at Nordisk Panorama, CPH:DOX, ANIMATEKA, and at HLSU/Lucerne University of Applied Arts and Sciences, among others.

Animated documentaries live at the fascinating brink where truth and fiction mingle, posing questions and inviting exploration into ideas of representation, narration, and fact. Documentary film is not, and perhaps never was, objective: all film is subjective, and the story belongs to the teller. Filmmakers around the world are breaking categories and genres, seeking the most powerful ways to tell the stories that matter to them, in a breathtaking proliferation of techniques, technologies, and narrative styles that defy classification.

As animated documentaries advance further, merging across platforms and disciplines, the next wave offers even more avenues for exploration and expression. And, while this is a global movement, there’s no doubt that it has seen a special flourishing at TAW. “The Animation Workshop wholeheartedly embraces the world of narrative opportunities brought to the table by the animated documentary genre. We are proud to support creative innovators and risk-takers, and can’t wait to see what emerges next from ANIDOX, and the frontiers of animated filmmaking,” says Tim Leborgne (b. 1974), Department Director at TAW. 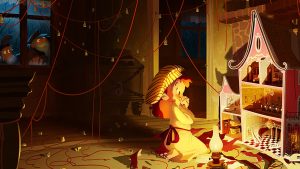 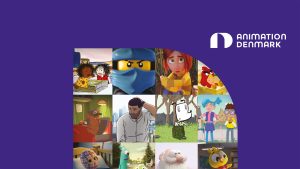 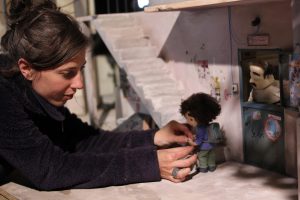 A tale of hope and despair, behind The Tower 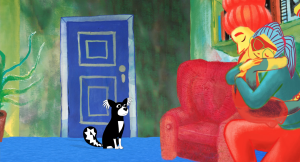 Pablo Pico: Music to your ears